Ashley
Hello Everyone! My name is Ashley, I have recently gotten married and started a family of my own. One of my favorite things to do is cook and create new dishes. I also love love love to eat! I started blogging over 2 years ago about my encounters with food, after a few set backs I am back and can not wait to share my experiences with everyone about food and also hear about yours! I hope my blog will get you out of your food shell and try new things, not only with cooking but tasting also!! 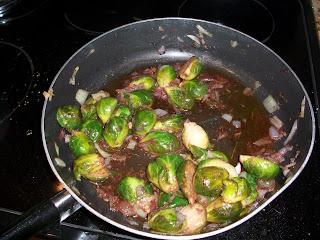 This being the first week of the challenge of cooking something new I decided at the grocery store to pick up brussel sprouts. I am not that picky of an eater and even though I have never tried brussel sprouts I was sure I would probably like them. Well I was wrong they were horrible! Now this could have been because of the way I cooked them, but I doubt it. I could not stand that bitter after taste it left in your mouth after you ate them.

Anyway it all sounds good but what I think is that if I would have cooked them longer the bitter after taste would have not been so bad. But I am all for trying new things and tomorrow is grocery shopping day which means something new to cook!!

Does anyone else have any brussel sprout recipes???
Posted by Ashley at 7:49 PM